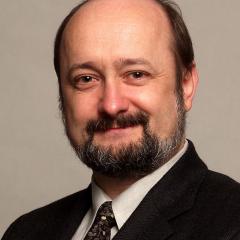 Dr. Alexander Waibel is a Professor of Computer Science at Carnegie Mellon University, Pittsburgh and at the Karlsruhe Institute of Technology, Germany. He is the director of the International Center for Advanced Communication Technologies (interACT). The Center works in a network with eight of the world’s top research institutions.  The Center’s mission is to develop multimodal and multilingual human communication technologies that improve human-human and human-machine communication.  Prof. Waibel's team developed and demonstrated the first speech translation systems in Europe&USA (1990/1991 (ICASSP'91)), the world’s first simultaneous lecture translation system (2005), and Jibbigo, the world’s first commercial speech translator on a phone (2009 (www.jibbigo.com)).

Dr. Waibel was a founders and served as chairmen of C-STAR, the Consortium for Speech Translation Advanced Research in 1991.  Since then he directed and coordinated many research programs in speech, translation, multimodal interfaces and machine learning in the US, Europe and Asia.  He currently serves as director of EU-Bridge, a large scale European multi-site Integrated Project initiative aimed at developing speech translation services for Europe.  He also serves as co-director of IMMI, a joint venture between KIT, CNRS & RWTH and as principal investigator of several US and European research programs on machine learning, language portability and performance.

Dr. Waibel is a Fellow of the IEEE and has received many awards for pioneering work on multilingual speech communication and translation technology. He has published extensively (>650 publications, >21,000 citations, h-index 74) in the field, and received many patents.

During his career, Dr. Waibel founded and built 10 successful companies. The latest, Jibbigo, built and distributed the world’s first speech-translator on a smart phone.  Since 2007, Dr. Waibel and his team deployed these technologies in humanitarian and disaster relief missions to improve communication between healthcare providers and patients in remote areas of the developing world.

In a Digital Single Market, communication across the language divide is key. However, meeting the needs require and effective balance between

I will show examples and videos/demos of resulting systems and deployments: